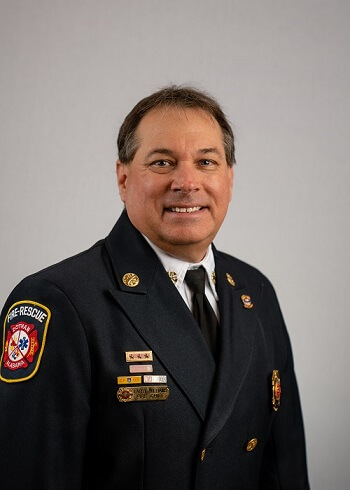 Larry Williams has proudly served as the Fire Chief of the Dothan, Alabama Fire Department since 2006.  His responsibilities include the management and oversight of all operational and administrative functions of a comprehensive emergency services department.

Chief Williams’ educational accomplishments include an Associate of Applied Science degree in Emergency Medicine from Wallace Community College and a Bachelor of Science degree in Management from Troy State University Dothan.  Chief Williams is a graduate of the National Fire Academy’s “Executive Fire Officer Program” and is the recipient of the International Association of Fire Chief’s “Chief Fire Officer Designation”.

Chief Williams is active in teaching and presenting fire and emergency medical service topics throughout the nation.  As an author, Chief Williams has written several technical articles that have been published in national fire/rescue journals.  These magazine articles relate to operations, training and safety.

Chief Williams’ community involvement includes memberships with various agencies, including the Wiregrass Red Cross, where he served as Board Chair.  He is an active member of the First United Methodist Church of Dothan and a Board member of the Dothan Rotary Club.  His lovely wife is Sharon and they have two daughters, Lindsay and Nikki, as well as, a special Buddy – Grandson Brayden.