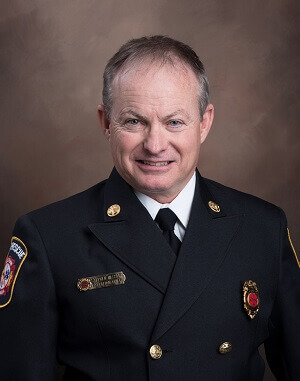 Chief Messer began his service with Dothan Fire Department in December 1993.  He served as a Firefighter on Engine 1 and Engine 4 before being assigned to the Rescue Division in late 1994.  On being promoted to Captain in early 2000 he was assigned to the Training/Safety Division as the Training Captain.  He served as an Engine Captain at Station 1 for 2 tours and at Station 9.  Chief Messer obtained his Masters Degree in Emergency and Disaster Management in 2014.  He was promoted to Battalion Chief in August 2017 where he was assigned as an Operations Battalion Chief over 1st Battalion, B Shift. Along with his operational duties, Chief Messer serves as the lead in all inter-agency exercises and as the EOC Manager for the Dothan – Houston County EMA.    Chief Messer travels extensively teaching for the Alabama Fire College and the Center for Domestic Preparedness.  He is married to Katrina and together they have 4 children and 6 grandchildren.