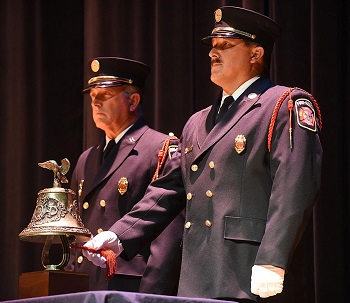 The purpose of the Dothan Fire Department Honor Guard is to honor fire service members and their families, to assist fellow departments, and to respectfully represent the fire service while participating in public events.

Throughout most of history, the lives of firefighters have been closely associated with the ringing of a bell. As they began their hours of duty, it was the bell that started if off. Through the day and night, each alarm was sounded by a bell, that called them to fight fire and to place their lives in jeopardy for the good of their fellow man. And when the fire was out, and the alarm had come to an end, the bell rang three times to signal the end. And when a Brother (Sister) has completed his (her) task, their duties well done, the bell rings three times in memory of, and, in tribute to, his (her) life and service.

The universal symbol of a Firefighter is the Maltese Cross. It is a sign of protection and a badge of honor. Its story dates back hundreds of years. The Maltese cross is known around the world as a symbol of the fire service. It is adorned on fire apparatus, fire department uniforms, and the center piece of many department patched and badges.  So where did the Maltese cross come from, and how did it become  the symbol of the fire service?

When a courageous band of crusaders known as Knights of St. John fought the Saracens for possession of the holy land, they were met with a weapon of war they had previously not encountered. It was a simple, but horrible device of war. It caused excruciating pain and agonizing death to countless brave warriors.  As the crusaders advanced on the walls of the city, they were struck by glass bombs containing naphtha. When they became saturated with the highly flammable liquid, the Saracens hurled a flaming torch into their midst. Hundreds of the knights were burned alive. Seeing their comrades trapped and dying, the knights charged to the rescue, risking their lives to save their brothers-in-arms.

Thus, these men became the first of a long list of courageous Firefighters. Their heroic efforts were recognized by fellow crusaders who awarded each hero a badge of honor; a cross like the one firefighter’s wear today. Since the Knights of St. John lived for close to four centuries on a little island in the Mediterranean Sea named Malta, the cross came to be known as the Maltese Cross. The Maltese Cross is a symbol of protection. It means that the Firefighter who wears this cross is willing to lay down their life for others just as the crusaders sacrificed their lives for their fellow man so many years ago.

The Maltese Cross is a Firefighter’s badge of honor, signifying that they work in courage…a ladder rung away from death.